Born in Dublin, Ireland on March 1, 1848, Augustus Saint-Gaudens’s influence over American sculpture was considerable.  During his apprenticeships, he attended both Cooper Union and the National Academy of Design, studying drawing.  In 1867 he left for Europe where he studied in both Paris and Rome before returning to the U.S.

Saint-Gaudens took great interest in the “art of the coin”:  his $20 gold piece, the double eagle coin he designed for the U.S. Mint, though it was adapted for minting was first struck in 1907, in ultra-high relief (only 20 minted).  The coin took up to eleven strikes to bring up the detail.  The ultra-high relief did not strike properly and was deemed impractical for commerce.  The design was then flattened and a high-relief version was minted.  Even though it took eight strikes less, it was still considered impractical for commerce.  The coin was finally modified to a normal-relief version, which was minted from 1907-1933.  It is still considered to be one of the most beautiful American coins ever issued. 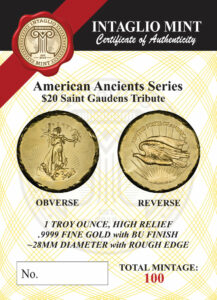 Note to collectors: Being hand fabricated, these medals will exhibit some small irregularities that are not considered to be detracting. Great care is taken to ensure there are no glaring inclusions that might diminish eye-appeal while still remaining true to the nature of the fabrication techniques employed.