Join the waitlist to be emailed when this product becomes available

Traditionally, gargoyles are thought to be created in the medieval period, but there have been discoveries of examples from ancient civilizations as well.  Gargoyles donned the roofs of Egyptian temples, their mouths serving as water spouts to help with drainage.  Greek temples also had similar pieces, the shapes often carved into ferocious animals, including lions.  The origin of the name gargoyle is often attributed to St. Romanus. Legend has it that he saved his country from “Goji,” a monster also called “Gargouille.”  It was said that evil spirits were frightened off by the sheer horror of the monster’s appearance.  This led to some calling the monster a protector and placing similar carved pieces on churches and other important buildings.  The Tower of London in England is surrounded by gargoyles, all bearing different grimaces.

Gargoyles throughout history have been created in several different images and figures.  Some even include figures of people, such as a monk.  Occasionally, they have continued to serve as rain and water spouts, but more often were ornamental, not providing a function.  As these spouts became less and less necessary, so did the use of gargoyles.

By the start of the 19th century, gargoyles were becoming more of a decoration than anything else.  Notre Dame de Paris has some of the more famous gargoyles from history.  Used as a form of decorations, some modern buildings in the United States were adorned with gargoyles, like the National Cathedral in Washington D.C., and Chrysler Building in New York City which has stainless steel versions.  The popularity of the Gothic Revival movement in the United States encouraged the use of gargoyles and can be found at several Universities, including Duke, Princeton and the University of Chicago. 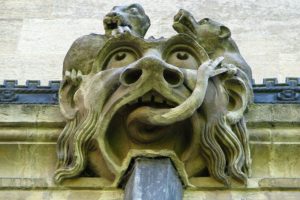