In numismatics, a mule is a coin or medal minted with obverse and reverse designs not normally seen on the same piece. These can be intentional or produced by error.  The earliest mules are found among ancient Greek and Roman coins.

LIMITED MINTAGE OF ONLY 100 PIECES 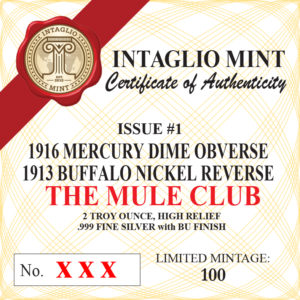 About the Mercury Dime:
Considered one of the most beautiful and iconic designs in American coinage, the Winged Liberty, commonly called the Mercury Dime, is rendered as a compliment to that design in this 2 ounce, Ultra High Relief, Domed Die Silver Art Medal.

About the Buffalo Nickel:
The Buffalo nickel or Indian  Head nickel is arguably one of the most popular and recognizable coins ever struck by the U.S. Mint.  It was designed by sculptor James Earl Fraser, and struck from 1913 to 1938.  In 1911, the decision was made to replace the Charles E. Barber’s Liberty Head design for the nickel, and James Earl Fraser was commissioned to do the work.  The Taft administration officials were impressed with the work.  The designs were approved in 1912, but were delayed by several months because of an objection of the Hobbs Manufacturing Company, a company that made mechanisms to detect slugs in nickel-operated vending machines.  Finally, in February 1913, Treasury Secretary Franklin MacVeagh made the decision to issue the coins despite the objection.


Mercury Dime Obverse: Winged Liberty Head surrounded by “LIBERTY” and “IN GOD WE TRUST” below the portrait. Key Dated 1916

Buffalo Nickel Reverse:  “UNITED STATES OF AMERICA” around the top of the outer circumference, with the words “E PLURIBUS UNUM” below “AMERICA,”  above a high-relief depiction of the American Bison.  “TWO TROY OUNCES” centered below the bison, with the Mint Mark and Hallmark below.