The first issue in our Carson City Dollar Tribute Series!  This series will be sold by Pre-Sale only, and the number we sell during this period will be the final mintage!

A branch of the United States Mint, the Carson City Mint was located in Carson City, Nevada.  The mint was built in 1863 but did not go into operation until 1870.  Minting coins in twenty-one different years, until it was closed permanently in 1893, with a hiatus from 1885 to 1889.

Built at the peak of the silver boom, and located within close proximity of the silver mines, the Carson City Mint struck 50 issues of silver coins and 57 issues of gold coins between 1870 and 1893, all of which bore the “CC” mint mark.

The Morgan dollar was a United States dollar coin minted from 1878 to 1904, and again in 1921. It was the first standard silver dollar minted since production of the previous design, the Seated Liberty dollar, ceased due to the passage of the Coinage Act of 1873, which also ended the free coining of silver. The coin is named after its designer, United States Mint Assistant Engraver George T. Morgan. The obverse depicts a profile portrait representing Liberty, while the reverse depicts an eagle with wings outstretched. The mint mark, if any, appears on the reverse above the “o” in “Dollar”. 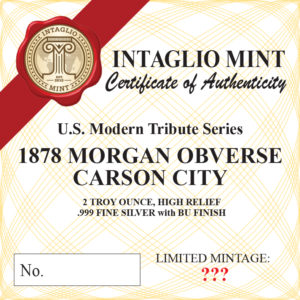